Eastgate Place - Salhouse Road
Used to be Georgian Leisure Club.
On the corner of Salhouse Road and Mousehold Lane is a model aircraft which you can see below. It was put there to commemorate the 100 years of the RAF. 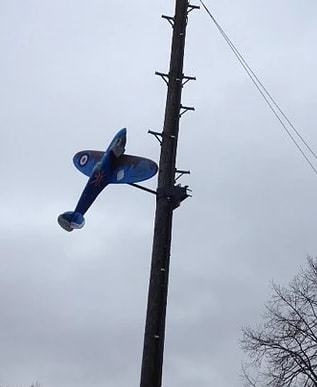 ​Sprowston Retail Park
There used to be a big Boulton & Paul building near the corner of Salhouse Road and Moushold Lane. They made aircraft. I need more info please help! There was also aerodrome cottages where Dunelm Mill now stands.

Unit 1 -2 - Dunelm Mill used to be Millers Bros Electrical. Unit 2 started out as Pets At Home and moved to Unit 4
Unit 3 - Carptet Right
Unit 3A - Dreams
Unit 4 - Pets At Home
Unit 5 - DFS
Unit 6 - Harveys
Unit 7 - Sofology
Unit 8 - Wren Living
Unit 9 - Furniture Village
Unit 10 - S.C.S. used to be Texstyle World ​
Unit 11a - Oak Furniture
Unit 11b - KFC ​
Below is parts for an aircraft being transported from Thorpe Train Station on the mini railway through Mousehold and into the yards of Boulton And Paul on Salhouse Road. 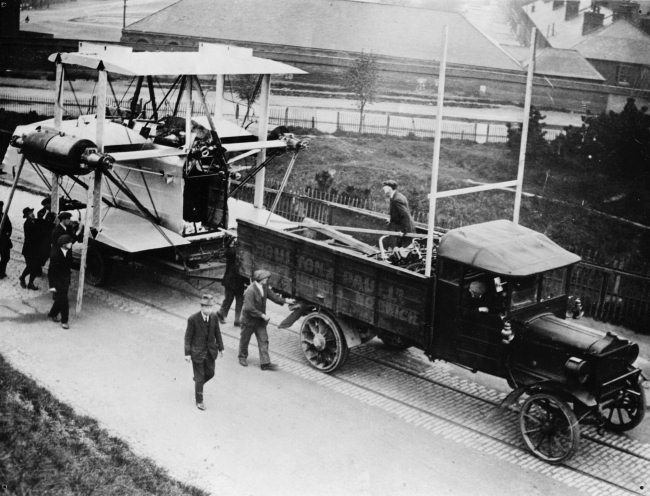 12 Salhouse Road
While walking down the road I noticed the houses start at no 12! Anyone know what happened to the rest?! Maybe Nos 2-10 were also there once but knocked down to make way for Heartsease High when it was built?
99 Salhouse Road
The bungalow in the picture below used to be a Cafe called Anne's Café and was run by Anne George. I've also been told there used to a parrot here that swore lots! There was also a poodle dog roaming the café! This has now closed and has been transformed back into the bungalow you can see below. Anyone know when it closed as a café?

​107 Salhouse Road - Fatso's
This used to be called The Yeoman and opened in March 1957 around the same time as the Heartsease Estate estate was being built. The first landlord was Percy Shepheard and shortly after Harold Burnham and his wife Doris took it over and ran it till 1983 when he retired. The pub was possibly named in honour of the Norfolk Yeomanry, formed in 1785.

In 2001 the then landlord of the Blue Boar on Wroxham Road David Turnbull took over and renamed it Tommy T's which was named after David's son This was an American style burger and steak house. The restaurant was famous for its "Elvis Burger" which was massive. I know as I ate a couple of them and felt very full afterwards!

In 2007 it changed to Fatso's and is now run by Anglia Restaurants. If you look at the entrance on Falcoln Road you can actually still see an old Tommy T's sign! 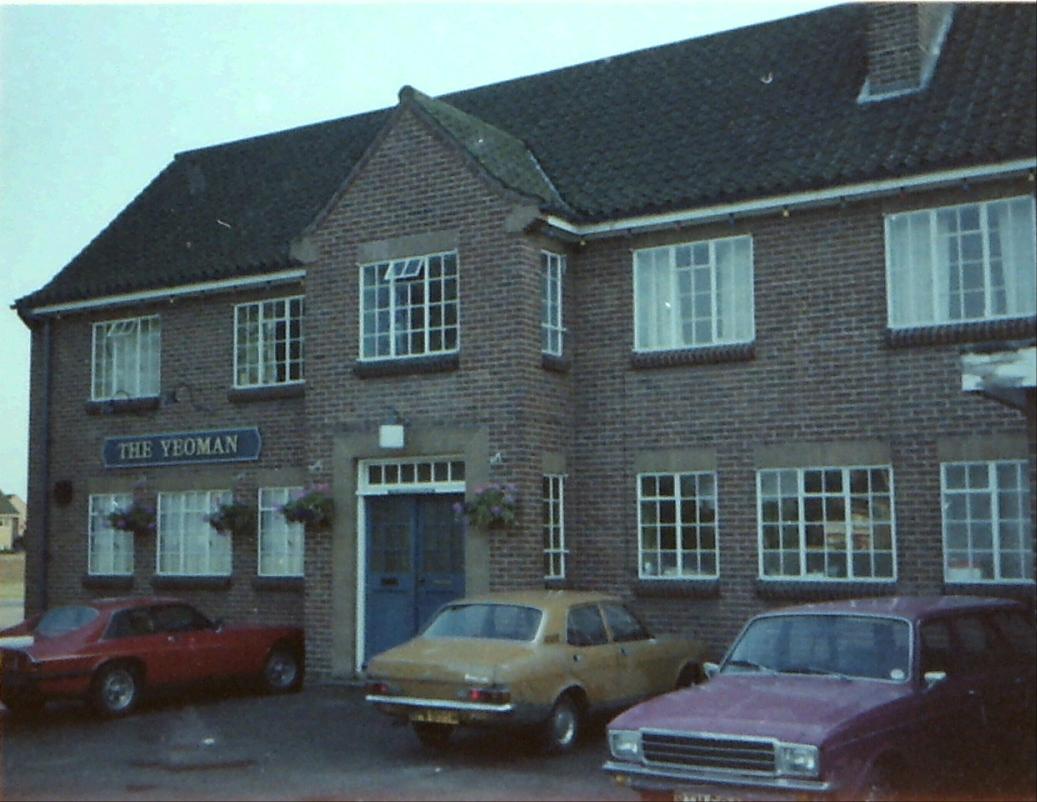 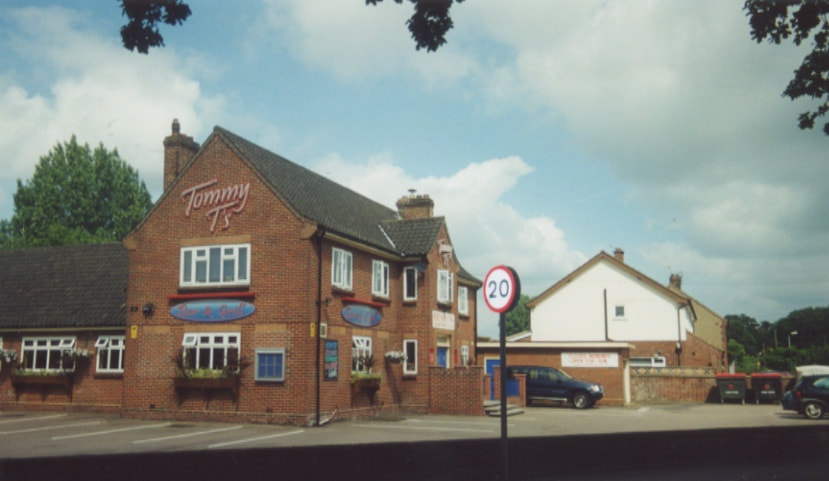 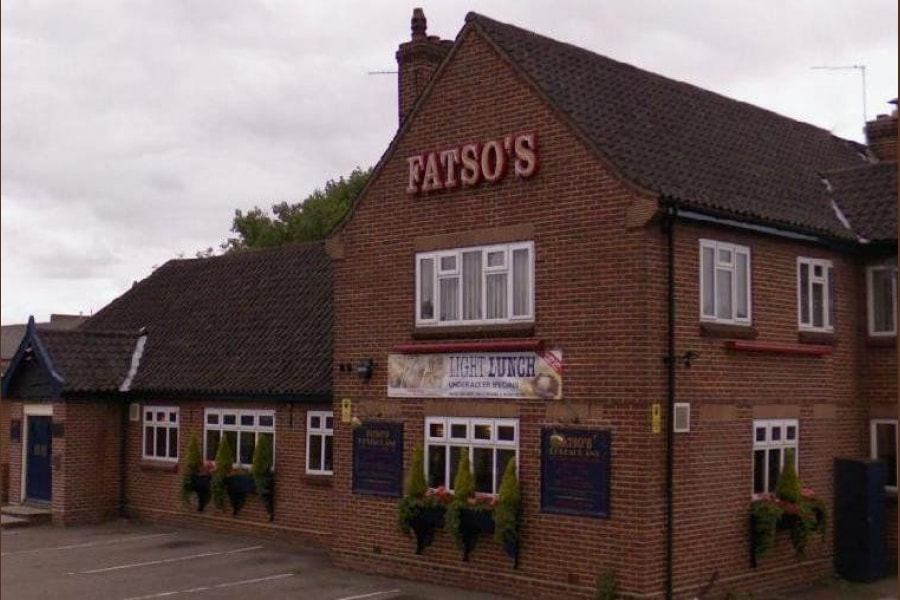 109 Salhouse Road
This used to be a butchers shop called Browns and later Palmers Butchers. It was converted to a house in 2003.

​111 Salhouse Road - The Card Shop
The card shop was originally a grocer shop under the name of Goldsmith and also W. & E. Vaissiere. I also remember it as a second hand shop in the late 90's I think. 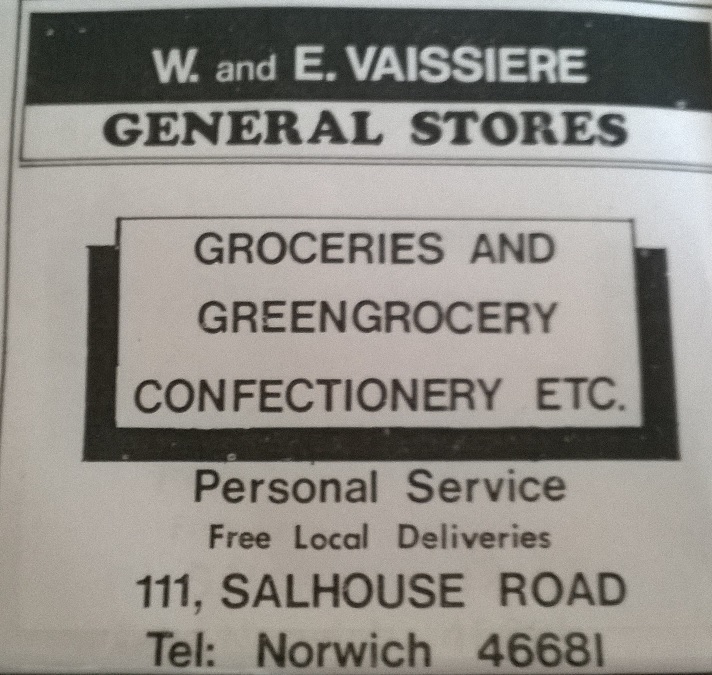 ​
​11B Sprowston Retail Park - Barnards Fencing
Used to be JJB Sports and now KFC. The factory was a 15 acre site was in use between 1826 and 1990. They invented wire netting. They used to produce chain-link fencing by machine. They also made lighthouses off the coast of Brazil and made the gates at Sandringham. They also made the Chessington Zoo in Surrey, later to become Chessington World of Adventures train. More info here. They closed in 1991 and was replaced by the Sprowston Retail Park. Barnards Fencing or sometimes known as Barnard's Iron Works was bombed on 9th July 1940 during the second world war, killing four men as reported in this story here. Later known as Tinsely Wire Industries
CJ Ball
This petrol station opened around 1969. In the 60's it was managed by Alfie Shailer and it was orginally called Woodland Car Sales. It got redeveloped in the late 80's so that it was just a BP Petrol Station and added a car wash round the back.

Duffield Marine Ltd was where the main CJ Ball showroom is now.

Ray Gimbert on Facebook tells "I used to work on the pumps at Woodland Car Sales and my Dad Bob Gimbert ran it. "As far as I can recall it's always been a BP filling station. Dad is long gone now, but when he bought into the company, he had a showroom added to the workshops (where the main CJ Ball shop is now) which after several successful years of trading was then pulled down and rebuilt into it's current configuration. After dad retired, it was then split into two business's, where dad's partner retained the petrol sales, but sold on the workshops and new showrooms.


The garage promoted both Simca and Fiat franchises and for a short time Rootes, seeing in the Hillman Imp. Reverting back to Fiat and then to Alfa after Simca was swallowed up by Rootes. In the early 90s The Lind Group acquired the business and franchises, moving them to Heigham St. T The forecourt continues for several more years run by Paul Caston. CJ Ball opened in 2012. CJ Ball was established back in the 50's in Hales. 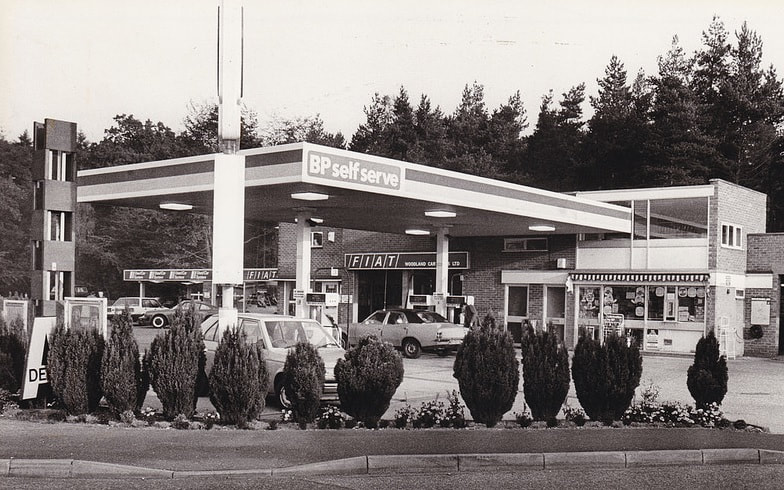 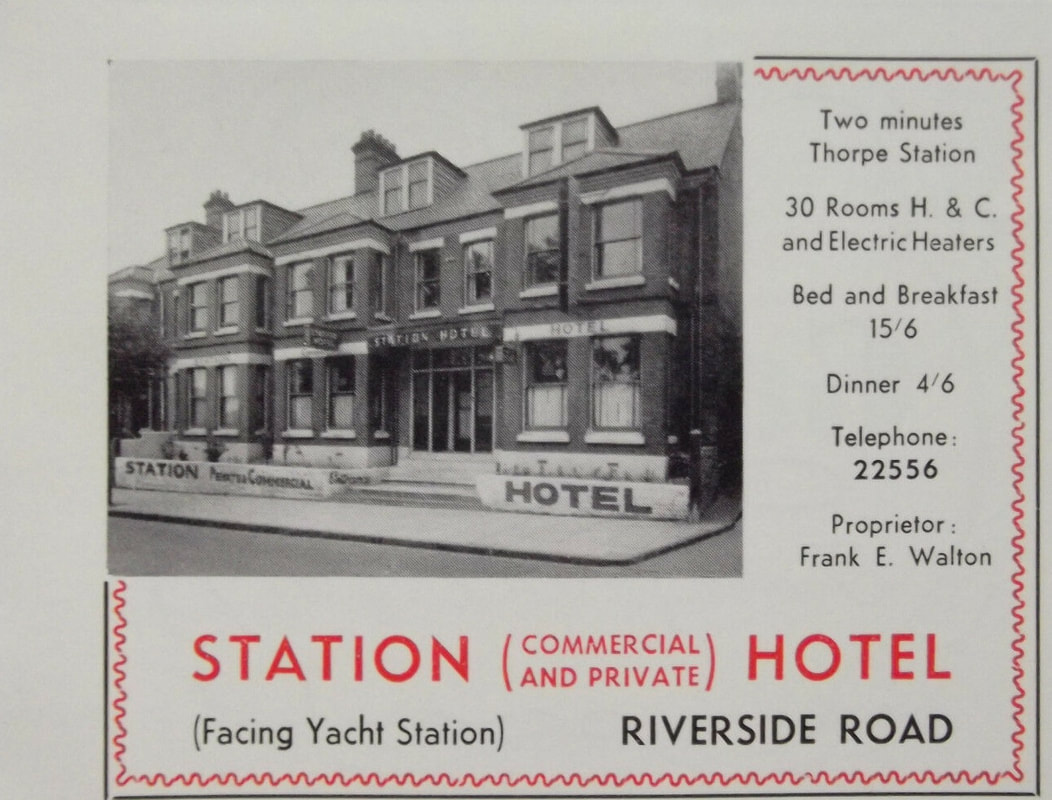 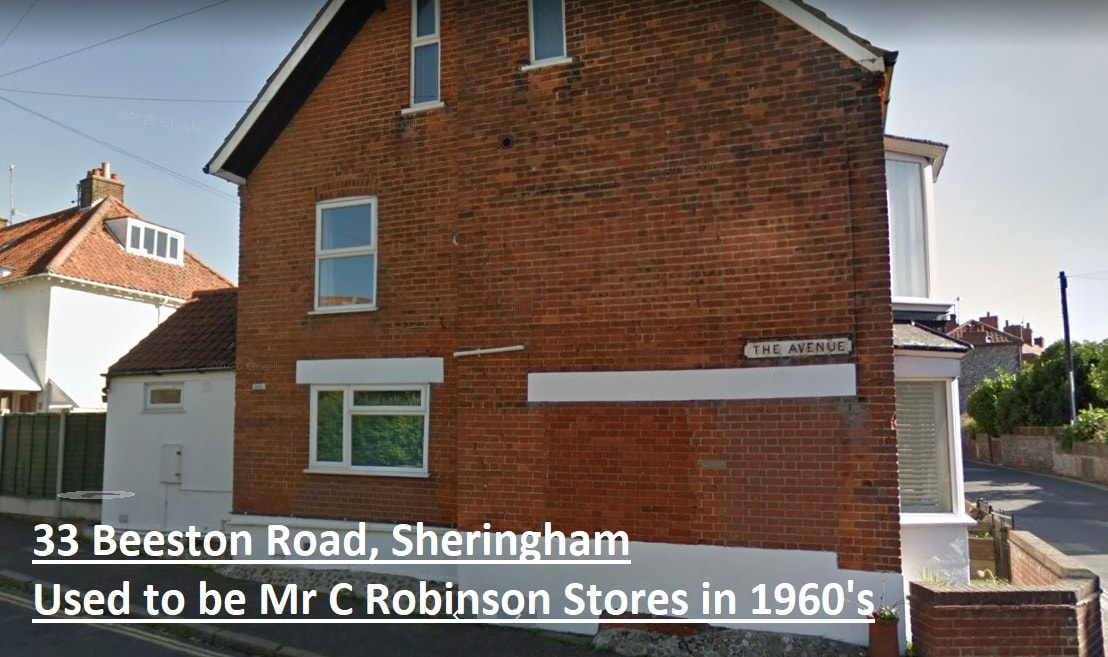 2014
Mousehold Heath Aerodrome
The airport was opened by HRH The Prince Of Wales in 1933. Boulton & Paul built the airport for flight testing and making airplans. Believe it or not where The Heartease estate is just off Salhouse it used to be the original Norwich airport! If you go down Roundtree Way you can see some of the original old aircraft hangers and there is another big one on Salhouse Road close to JJB Sport. The airport closed and moved where the current Norwich Airport is when RAF Horsham closed.
​
​​101-105 Salhouse Road - Nigel Farrow Cars
Around 1964 this opend as an Esso garage and owned by Mr A Wright.. In 1979 the Esso petrol pumps were removed and it became a car sales showroom. Clive Atthowe Car Tuning Sevices was here once. Established in 1989 on another site on 32-36 Harvey Lane and the company moved to new premised in 2012 on the old site that used to be the Esso petrol station and later Goldstar Taxis. In 2009 Nigel Farrow Cars demolished the old site with the old house that housed Goldstar taxis.

Established in 1989 Nigel Farrow Cars Ltd. moved into it’s new, purpose built premises at 101 Salhouse Road in 2012.  Our MOT Testing Station and service repair workshop comprises of three MOT bays for testing cars, light vans, heavy vans, motorhomes and a five bay workshop where we can service and repair all makes and models of vehicles.  Since it was finished in 2012 to our specifications, we are welcoming customers who have been with us for many years (some from the very beginning) and look forward to meeting new customers on a daily basis.
from website - https://nigelfarrowcars.co.uk/​ 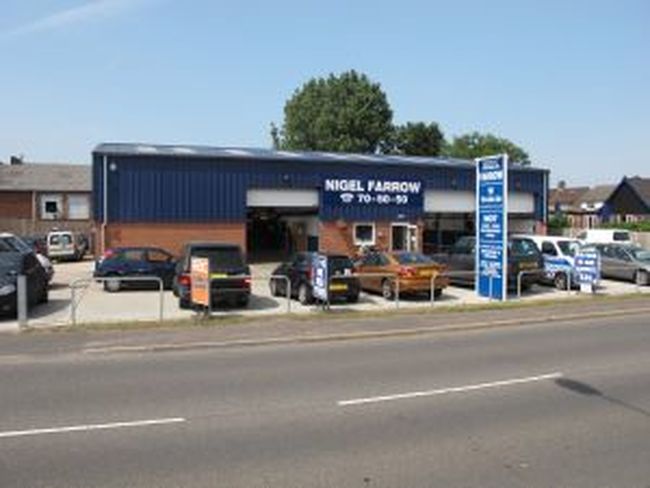 2008
Open Academy (formerly Heartsease High School)
Open Academy is a secondary school with academy status located in the Heartsease area of Norwich, in the English county of Norfolk.
The academy was first formed in September 2008, replacing Heartsease High School. Originally housed in the buildings of the former school, Open Academy moved to new buildings in September 2010. It is a Christian school that is sponsored by the Bishop of Norwichand businessman Graham Dacre.[1]
The school offers GCSEs, BTECs and vocational courses as programmes of study for its pupils. The school has a specialism in environmental science and offers courses geared towards the specialism.[2]
Open Academy was formerly a part of the Kett Sixth Form College consortium, which also includes Sprowston Community High Schooland Sewell Park College. The Kett operates as a separate entity to its host schools.[3] As of 2013, the Academy gained a separate Sixth Form, to be known as OA6 which is led by Claire Nugent. OA6 is a small, but growing Sixth Form, offering a variety of A-Levels and BTECs.

2008 - Where Open Academy now stands
​170-172 Salhouse Road - Woodside News, Food And Wine
If you look at this shop there are 2 doors. This was once actually 2 shops Bartams and Jubbs.

Bartums Newsagents was on the left hand side at no 170. It was run by Frank and Elsie Bartram.  It later became a Mace shop.

Jubbs was on the right hand side of Woodside News as you look at it today at No 172. Alan and Jean Jubb owned the shop for over 30 years and it was a Mace grocery shop. They sold the shop in 1976. Jubbs was sold to Doug and Sarah and then knocked into one as it is today. Thanks to John Jubb (Alan and Jean's son) who emailed me.

There was briefly a kebab van on the car park around 2015 but it was soon gone.
​

186-200 Salhouse Road - Wilco / Fastfit
The building where Wilco is now used be called Breck Farm and later it was an egg packing factory called New Lay Eggs by Nurdin and Peacock. The Wilco stores is owned by The Shortis Group and in October 2013 celebrated 50 years in the trade. The company started in a small shop on Barn Road.

Taken from their website here is a little history lesson about the company.

"The Wilco success story started in 1963 when Kevin Shortis as a 23 year old opened his first Motorist Discount Store in Norwich, bringing cut price, branded products to local car owners. It was an immediate hit. More stores were opened until in 1971 the company was taken over. However, this was not successful, due to the lack of personal attention and after a few years Kevin Shortis formed Wilco Motor Spares and then bought back four of his original stores including the Salhouse Road Head Office.

Now joined by his son Richard, Wilco had expanded to 18 outlets by 2004. In August of that year, Wilco took over the Leeds-based Motosave with it's 24 shops and fitting bays, therefore increasing the group to 42 stores staffed by over 600 enthusiastic employees, who are there to help by offering the right stock at the right price."

Zeller Plastics
This used to be one of the sites of Laurence & Scott. in 1991 it was CMB. The Zeller Plastik UK plant at Corby, Northants is closed and the entire operation is moved to the Norwich factory in 1996. Source

Ardagh Group
​This used to be be Tom Smith Cracker Factory that opened in1953 after moving from its other factory in London. Before 1935 the factory was a Caleys chocolate factory. They had a big fire in 1963 and if you look closely at the building near the roof you can see bits of black. Is this signs of the old fire? It closed in 1998.

Peter Kimpton has made a book all about crackers and alot of info about the cracker factory called Tom Smith's Christmas Crackers: An Illustrated History and you can read more information about the book and how to buy it here 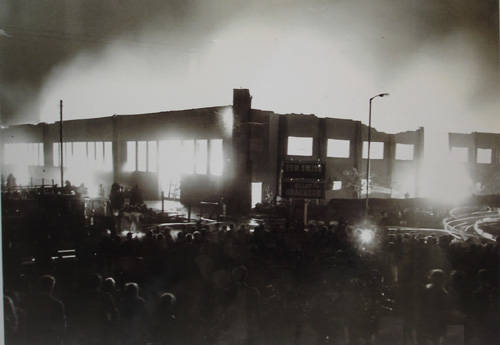 Picture of the Tom Smith Norwich factory fire in 1963.
​Mousehold Light Railway
In the First World War, ammunition made at factories on Salhouse Road (Boulton & Paul) was transported on a light railway on a track through the heath and linking with the tramway before making its way to the Railway Station. Remnants of the rails could be seen until quite recent times in the Station area close to Thorpe Road.
Taken from here - http://www.heritagecity.org/research-centre/at-leisure-in-norwich/mousehold-heath.htm
​​Greenborough Farm (Smallpox Hospital)
On a map from 1908 0n this website it shows Greenborough Farm and in brackets it said it was a smallpox Hosptial close to where the entrance is to Deloney Road but I have also read it was opposite where Fatsos is now and thats why there wasnt any houses built on that bit for ages even though there are some new houses there now. If anyone knows more please let me know. Has this hosptial got some link to the naming of Greenborough Road?