23 Mouselhold Lane
Used to be Invoice Discounting East Anglia Ltd
BP Petrol Station & M&S Simply Food
Thanks to Patrick Baron who has sent these pictures of the original Esso garage on Mousehold Lane. Thanks to Steve Watling who says "Used to work there on the pumps from about 1973. The shop looks the same but the lawn and flower bed had gone by then and the canopy had been replaced with a bigger one. Many good memories of working there 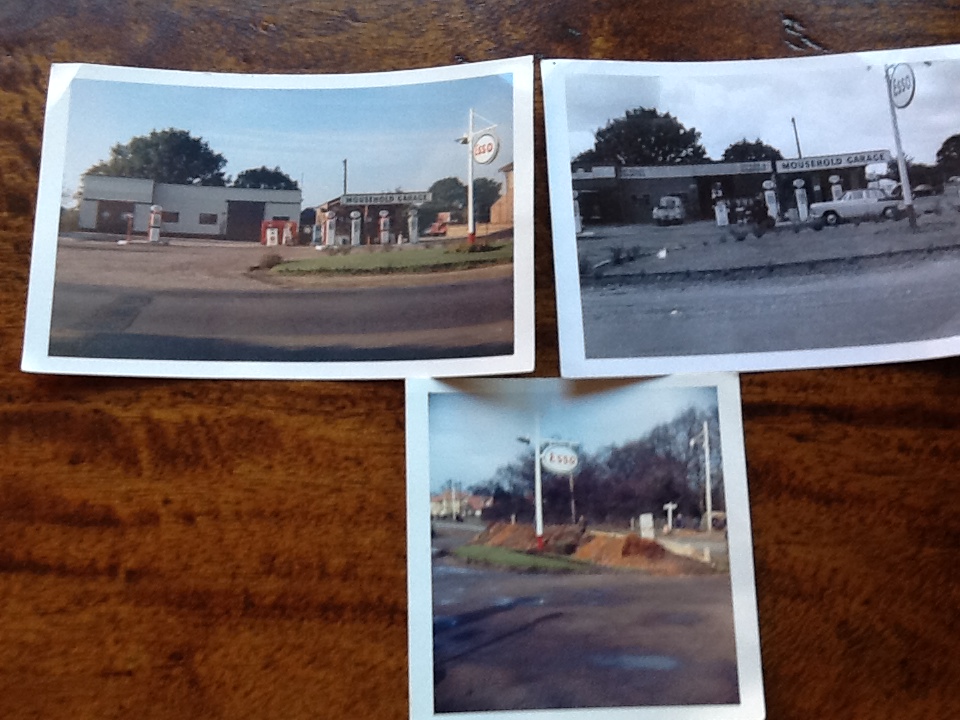 Rachael Heydon-Snelling tells us the house behind the petrol station below was no 58 and she lived in it and they sold the house to Esso and knocked the house down to fill in the cellar. 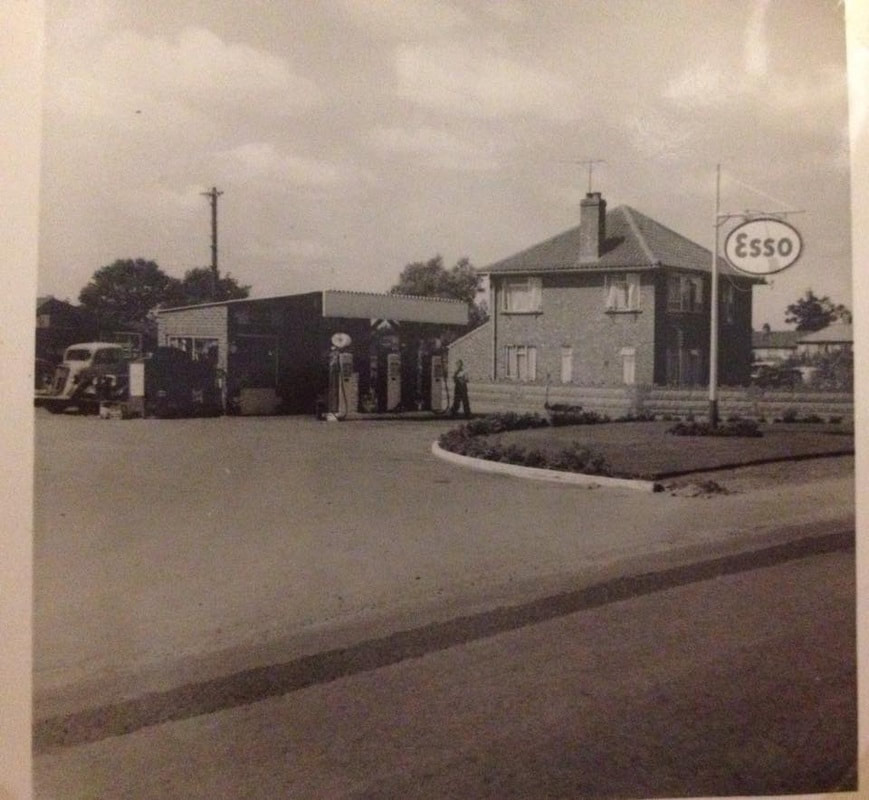 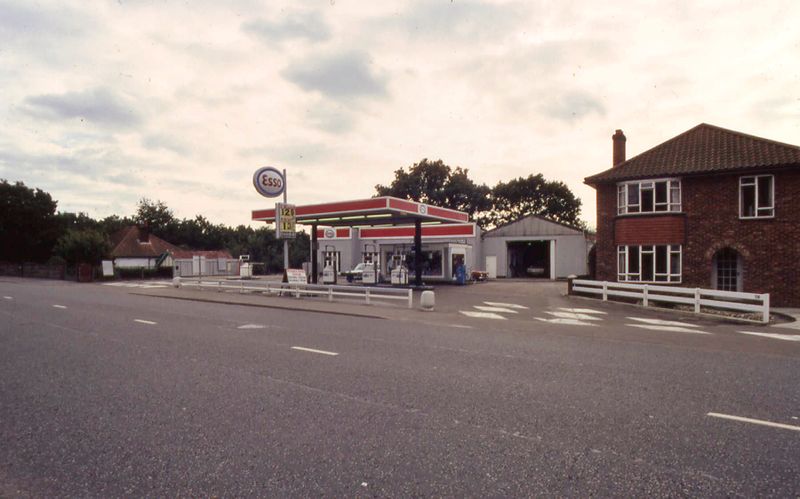 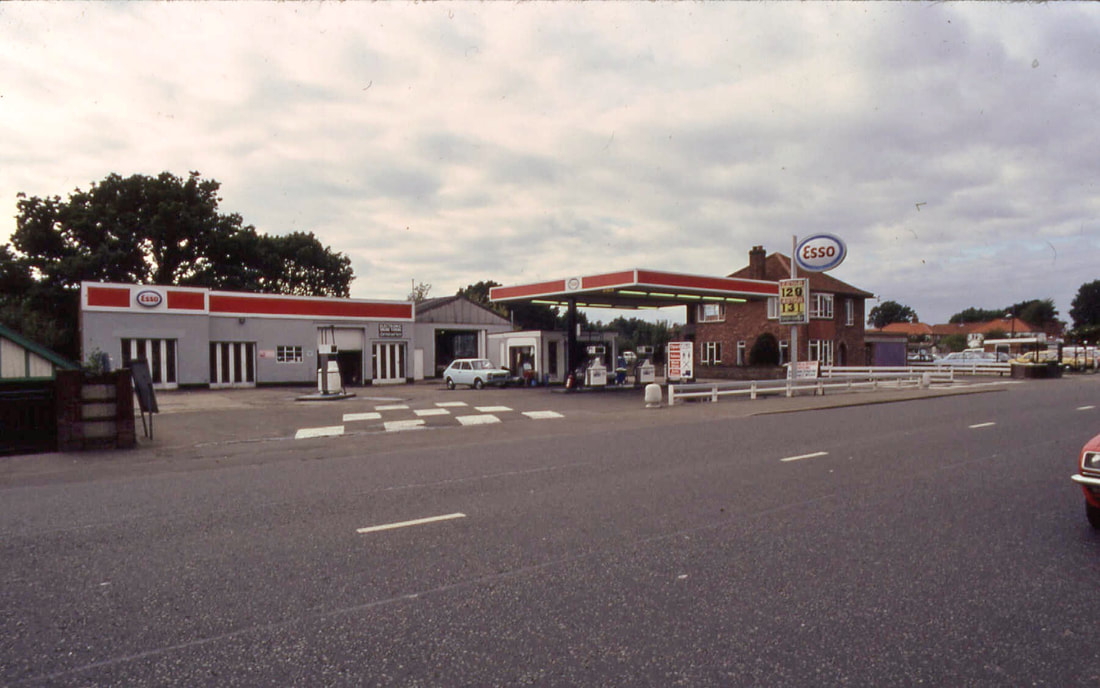 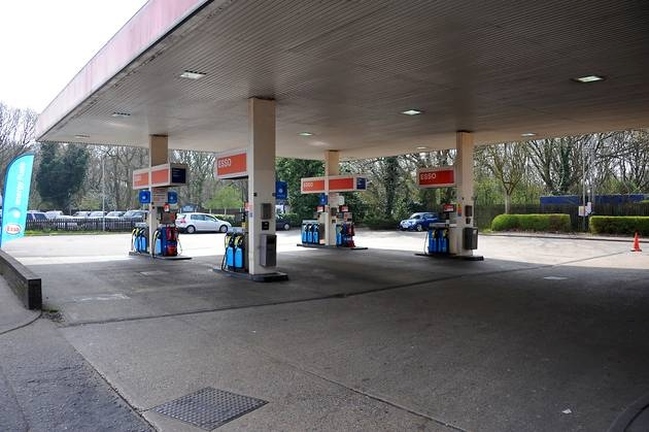 Bob Amiss Heathside Workshops
Used to be Holden & Heard Saab car dealers in 1987. Established in 1991 after Bob left the Norwich main dealership he had worked for since leaving school.
We initially specialised in Rover vehicles, but as our customers bought other models and wanted to continue to entrust them to us, we embraced all makes. Taken from here 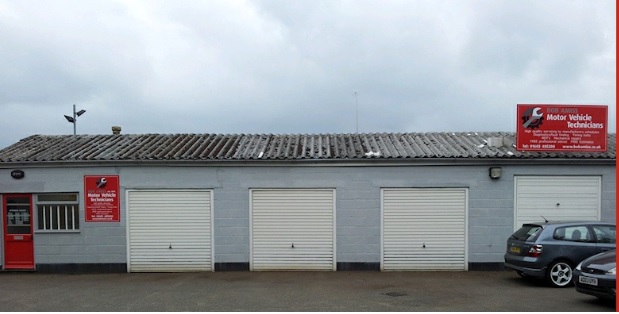 This photo was taken on 5th August 1935 by George Plunkett. It shows the view looking towards Mousehold from where the roundabout on Sprowston Road is now. Just to the right is where the old Sprowston Road Post Office used to be. 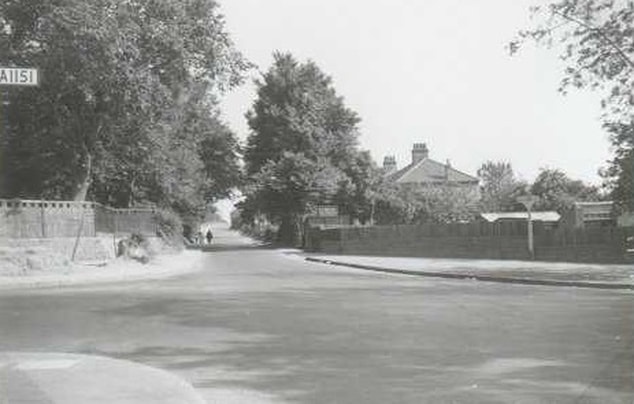 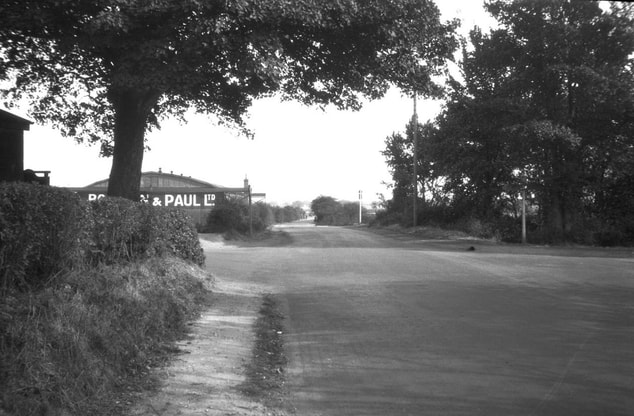 Photo: Kind permission of www.georgeplunkett.co.uk
This picture from 1933 is from the www.georgeplunkett.co.uk amazing collection of photos. It shows the junction of Mousehold Lane and Salhouse Road. To the left goes to Salhouse Road and also on the left hand side you can see a Boulton and Paul aircraft hanger. More info on the Salhouse Road page. Where George took this photo to his left would now be where Homebase is. The road has been widened alot now.
63 Mousehold Lane - Mousehold Garden Center
In 1960 this was a grocers shop called Mayfair Stores and was in the Spar chain of stores and was run by the Hudson family.

In 1971 it became a garden centre run by Andrew Palmer. It used to be a Grocers shop run by the Hudson family and a grocers shop called Mayfair Stores Stores shown below. This was called Mousehold Flower Centre in 1974 adjoining Byron's Garden Shop. 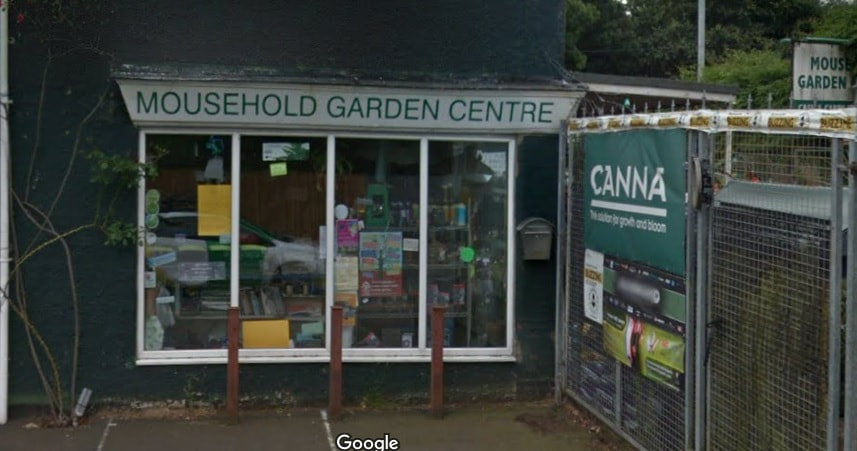 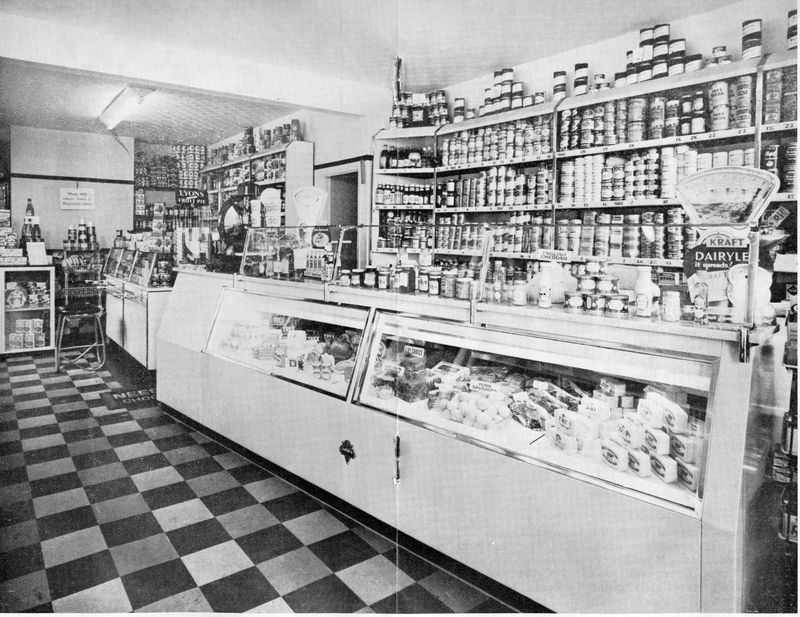 Mayfair Stores
Start Rite Shoes
Before it was Start Rite it was called Maclarens Handbag Factory. This has all been flattened now. 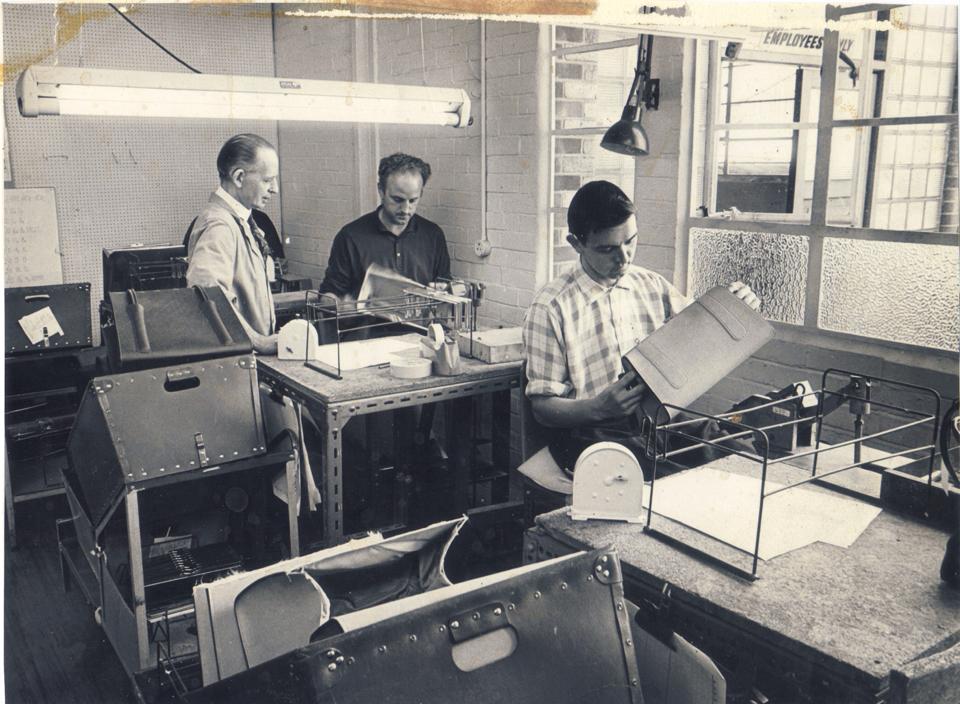 Inside Maclarens. Date not known. Thanks to Norma Marita

August 2008
Memorial Cottages
I bet you have drove past these cottages on the ring road many times but never noticed these cottages! They were built between 1948 and 1950, and the six cottages were built to commemorate the veterans of the Royal Norfolk Regiment, the members of which won five Victoria Crosses in the Second World War – the greatest number for any British division in the conflict.  The houses are named 'Europe' and 'Asia', after the theatres of war in which the regiment fought. The others are named after the Victoria Cross holders. This area and side of Mousehold Lane used to be Mousehold Plantation.

St William Chapel
Very close to the Memorial Cottages opposite the road in Mousehold next to the Wingfield Football Ground is the remains of an old chapel. It got its name from William the boy martyr, who is said to have died in a
ritual killing on the heath in the 12th century. Founded by Bishop  William Turbe in 1168, it had a cell of
monks and belonged to Norwich  Priory. It was demolished at the Dissolution of the Monasteries in the  16th century, but the mounds where the building stood can be seen east  of the Wingfield football ground. Visitors will notice the
dips and  rises of the landscape. These did not occur naturally but as a result of  extensive diggings for flint, lime and clay that scarred the area in the 17th century. This was strictly illegal and, occasionally, people  were fined by the courts. I would love to get down there soon to see if anything is still there. The name a connection to St Williams Way?

Rishi Restuarant - 26 Mousehold Lane
This used to be The Duke Of Norfolk and it was built in 1938 with James Edward Crockford as the first licensee. From 1988 until 1992 Albert Bennett, the former Norwich City footballer, was licensee. The pub was designed by W Copeman who also designed the Morrison Lodge, which used to be in Harvey Lane and is now demolished.

The Duke of Norfolk was put on the open market by then owner Enterprise Inns for a price tag of  £275,000. The pub was sold and refitted and then opened as Rishi. 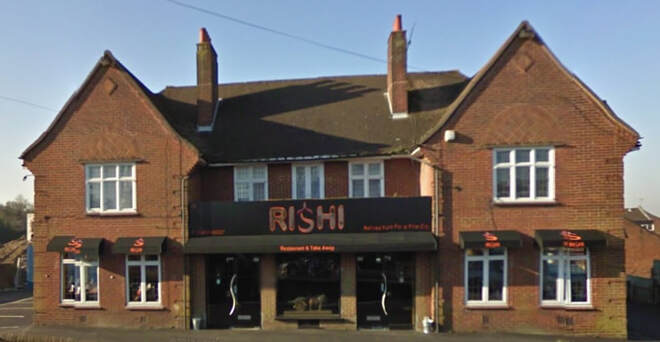